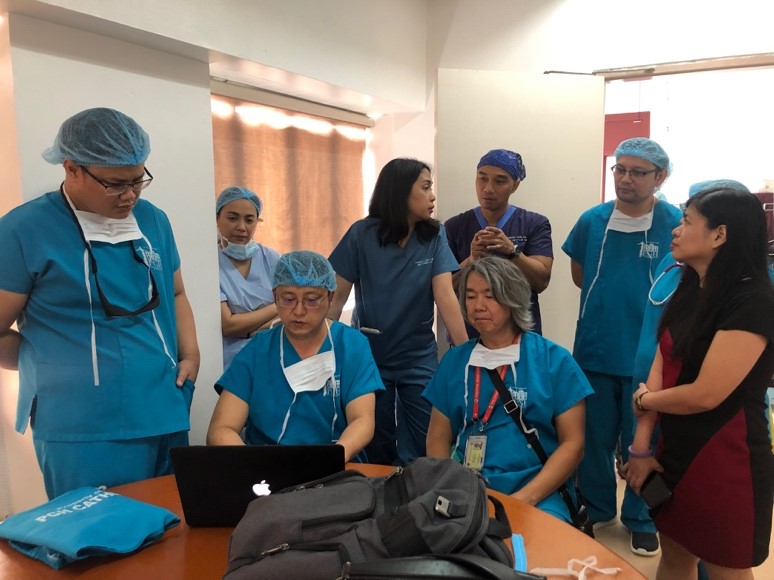 The Philippine General Hospital (PGH) is a tertiary state-owned hospital administered and operated by the University of the Philippines. It is designated as the National University Hospital, and the largest government facility and referral center. It has 1,500 beds, and has an estimated of 4,000 employees to serve more than 600,000 patients annually. PGH has 19 clinical departments which, with their attached units, offer the best facilities for the delivery of comprehensive care for Filipinos seeking specialty and subspecialty care. The PGH, being the heart of the University's Health Sciences Campus, is the largest training hospital in the country.

The patient was an 80-year-old male, referred to PGH for severe symptomatic aortic stenosis. Owing to his advanced age and poor renal function, surgical aortic valve replacement, an open-heart procedure performed under cardiopulmonary bypass, was deemed unsuitable after multidisciplinary team discussion. TAVI was considered the best treatment option. However, TAVI in this patient was also associated with significant technical challenges. It is well accepted that comprehensive imaging workup is of critical importance for pre-planning and intra-procedural guidance of TAVI. In this patient, however, CT images are of low quality because only limited contrast dose could be used during scan to avoid deterioration of renal function, making it rather difficult to assess aortic root anatomies. Fortunately, having an experience with more than 600 TAVI cases, Dr. Feng Yuan was able to evaluate the feasibility and specific risk of TAVI by using multimodality imaging. The patient had a tricuspid aortic valve with moderate calcification, both of which were favorable characteristics for TAVI. However, Sinuses of Valsava were narrow and the position of coronaries were low, as shown by Echocardiography and angiography, indicating high risk for the dreadful complication of coronary obstruction. After careful assessment and discussion with Dr. Dee Wirfred’s team, Dr. Feng Yuan suggested to proceed with TAVI using a 23-mm Venus A-Valve.

By selecting a small-size prosthetic valve and employing special implant techniques, Dr. Feng Yuan successfully helped the team to avoid coronary obstruction and other complications. Final angiogram showed that bilateral coronary arteries were patent and not affected, and the prosthetic valve was in an optimal position with only trivial periprosthetic valve leak. On postprocedural discussion, Dr. Dee Wilfred expressed his willingness of inviting Dr. Feng Yuan to continuously support the TAVI program at PGH in the future.