Feng Xiaoming: Seeking Truth from Facts in Scientific Research and Setting an Example in Nurturing Talents

The 3rd Future Science Prize was announced in Beijing on September 8th. Academician Feng Xiaoming of SCU, along with two other scientists, was awarded the prize in material science for his creative contribution to the invention of new catalysts and reactions, and for his outstanding achievements in providing new ways to synthesize organic molecules, especially drug molecules. This is the first time the organizing committee awarded the “Material Science Prize” to scientists in chemistry. 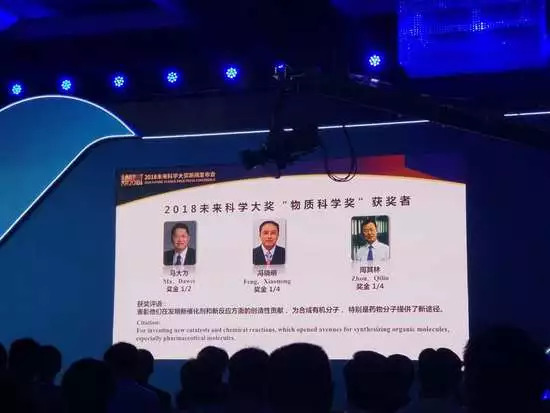 The Future Science Prize focuses on original basic scientific researches, known as the "the Nobel Prize in China". With a referenced to the model of Nobel Prize, Fields Prize and Turing Prize, the appraisal and election is conducted by a review panel composed of Nobel Prize winners, academicians of the American Academy of Sciences and authoritative professors from famous universities at home and abroad. Following the principles of fairness, justice and credibility to maintain the independence of the prize, the review panel, by referring to directional nomination, grants the prize to scientists who have made outstanding achievements in science and technology development of China (not limited to nationality).

Referring to Professor Feng Xiaoming, the first thing that raised concern in the academic community was chiral N,Nʹ-dioxide-Sc(OTf)3 complex catalyzed asymmetric Roskamp reaction firstly developed by Feng and co-workers. In 2011, Elsevier included this reaction in "Organic Syntheses Based on Name Reactions" (the third edition) and named it as "Roskamp-Feng Reaction", which also represents the first example that the work done by Chinese scientists in China was included in name reaction.

After nearly 20 years of hard work, the research team led by Professor Feng has carried out systematic and in-depth research on asymmetric synthesis and made breakthrough progress. The ligands developed by his research team are highly recognizable in structure, and as a rare type of "all-round" asymmetric catalysts, they can be used alone as asymmetric organic catalysts or as ligands to form many metal complexes with various metal salts. The resulting chiral N,Nʹ-dioxide-metal complexes have been successfully applied in more than forty asymmetric catalytic reactions, especially in several new asymmetric transformations of importance, which not only offer effective methods for the synthesis of some important chiral molecules, but also provide a research basis for a deep understanding about the laws of chiral induction and transmission. The Natural News publication “Nature-China” refers to this research work as “encouraging chirality”. Due to these results, it was selected as one of “Top Ten Sci-Tech Progress of Chinese Higher Education Institutions” in 2011.

The achievements benefited from the assistance of his team in the arduous journey.

Prof. Feng along with his team made such achievements through eight years of efforts in the scientific research. Commenced in 1999, this research did not achieve any results until 2007. According to Prof. Feng, “it is impossible to avoid barriers in scientific research. Research is a process in which the unknown is turned into a known one amid uncertainty. A lot of efforts fail and most of the researches are fruitless like sand being swept away by great waves. We always struggle with the ups and downs. You don't know when you are going to succeed. It might take a little longer to make it, or you might never succeed.”

“Although it is difficult to make a breakthrough, it would open a new door, triggering a series of follow-up progress once a breakthrough is made.” Recalling the difficulties at the beginning, Prof. Feng feels grateful. “I was very lucky to get much understanding and support from many of my predecessors and friends. With their help and the efforts of hundreds of students who participated in the whole study our research team could have made such progress.”

“Seeking truth from facts” is the overriding criterion.

“Seeking truth from facts” was most frequently mentioned in Professor Feng’s interview, and taken as the principle of life he always adheres to.

“Chemistry is an experimental science, the results of our research are meant to be used to make products, so there is no room for hypocrisy. Seeking truth from facts is extremely important, not only in scientific research but also in life. If your achievements not practical and realistic can’t withstand tests, or be reproduced, how can they be applied? If you don’t seek truth from facts and can’t stand the test, how can you win credibility?”

“That's what the teacher says and does.” His students said that in group meetings and daily exchanges, Prof. Feng often emphasizes if the research results can stand the test and be reproduced.

The reason for the success of Prof. Feng's research team lies in his persistence in the development concept for 22 years: wisdom, diligence, integrity, self-confidence, seizing opportunities, firm belief, braveness to innovate, seeking truth from facts and strengthening responsibilities.

Prof. Feng places much emphasis on beliefs and social responsibilities. “beliefs are not empty words, and they determine a person's life orientation. It can be said that his achievements, and his contributions to his family, to his parents, and to the country, all count on his beliefs. In addition to personal career development, we must also remember that everyone has a public responsibility and can’t wait to enjoy others’ achievements. Only when everyone fulfills his or her duties will the collective function well and in turn promote personal growth. Nowadays, people complain a lot about the society, but they do not think that if we, 1.4 billion people, do our own things well, the country will naturally become strong.”

“Teaching and educating people” is the foremost duty.

When Prof. Feng talked about his own understanding of the sacred identity of teachers, he said, “when a teacher stands on the rostrum, serving as a teacher is her/his first status, and teaching and educating people is her/his primary duty. To teach and educate people, teachers should first play the role of benchmarking. Therefore, their rigorous and realistic style is very important.”

“Chemistry is always a central, vibrant and practical subject.” When talking about scientific research, Prof. Feng, who are always calm and serious, became enthusiastic. “Chemistry is indispensable to the production of substances. It can be said that chemistry coexists with the human beings, but many problems remain unsolved. What we’ll do is not only to pay attention to the present status of chemistry - to make a thorough study of what exists in nature, but also to think about the future of chemistry and build a new nature. So personally, I may do this in my whole life.”

In 2016, Science unveiled 125 of the most challenging scientific issues and made it clear that these are important issues the humans will be working on in the next 1/4 century. “Two of them are closely related to chemistry, namely, whether there is a limit to reasonable chemical synthesis and what is the origin of the principle of chirality in nature. All this will take us a long time, or even a few generations to study.”

“The so-called usefulness is that our research results should not only be acceptable in academic circle, but also be put into application and commercialization.” Prof. Feng Xiaoming, together with his team, has fulfilled this standard. In addition to some basic research results invested in industrialization, and the developed chiral reagents sold in large companies as commodities, the developed catalyst has also been used in their research by well-known universities and research institutes at home and abroad, such as the University of Chicago, Tokyo University, Peking University.

Referring to the next step of the research project, Prof. Feng said he will continue to carry out the deeper research in the field of asymmetric synthesis, approaching the goal of 100% conversion and zero emission. “Although relatively good progress has been made, there are still many scientific problems, especially regularities that need to be summarized - experimental science and theoretical research contribute to formation of theory that in turn guides the development of research. In addition, some applied results, for example, can better benefit the mankind if biological activity screening is expected to help produce several useful active molecules in synthetic compounds.”