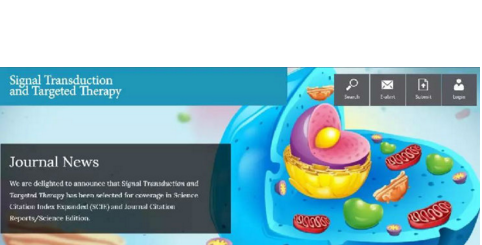 Recently, the Signal Transduction and Targeted Therapy (STTT), the English academic journal co-sponsored by both the West China Hospital of SCU/the National Key Laboratory of Biotherapy and Springer-Nature Publishing Group has been officially included in the SCI database, and the first impact factor is expected to be acquired this June.

The Signal Transduction and Targeted Therapy is a professional biomedicine journal in English published jointly by both the National Key Laboratory of Biotherapy and Springer-Nature Publishing Group (website: http://www.nature. com/sigtrans).

STTT is among the first batch granted D-category subsidy for China Sci-tech Periodicals International Impact Enhancement Program. Founded in 2016, it aims to become an academic journal with international influence in the field of signal transduction and targeted therapy, which publishes researches involving tumors other serious diseases.

STTT has an international editorial board consisting of Professor/academician Wei Yuquan from WCH of SCU, Professor Zhang Kang from University of California, San Diego, and Professor Carlo M. Croce from Ohio State University of USA. It has now 87 editorial members from more than ten countries such as the United States, Australia, Germany, France, Italy, and Japan, contributing a lot to the quality control of the Journal. As the sponsor of this journal, WCH of SCU has provided a disciplinary platform and talent support for the startup of the journal.

As of now, STTT has been included by a couple of international major databases, such as SCI, Scopus, PubMed Central (PMC), Directory of Open Access Journals (DOAJ) and BIOSIS. Inclusion into SCI will be helpful to enhance the international influence of STTT.

In addition, STTT has been selected as the Q1 Periodical with World Academic Influence (a total of 80 Chinese sci-tech periodicals selected) in the Annual Report of World Academic Journal Citing Influence Indexes recently launched by the China Scientific Literature Evaluation and Quantization Research Center. Two articles published by STTT have also been selected as the 2018 Top 100 Excellent Articles of Chinese Medicine, in which the Role of MicroRNAs in Human Cancer co-written by Professors Yong Peng and Carlo M Croce has been cited for 180 times since its publication.